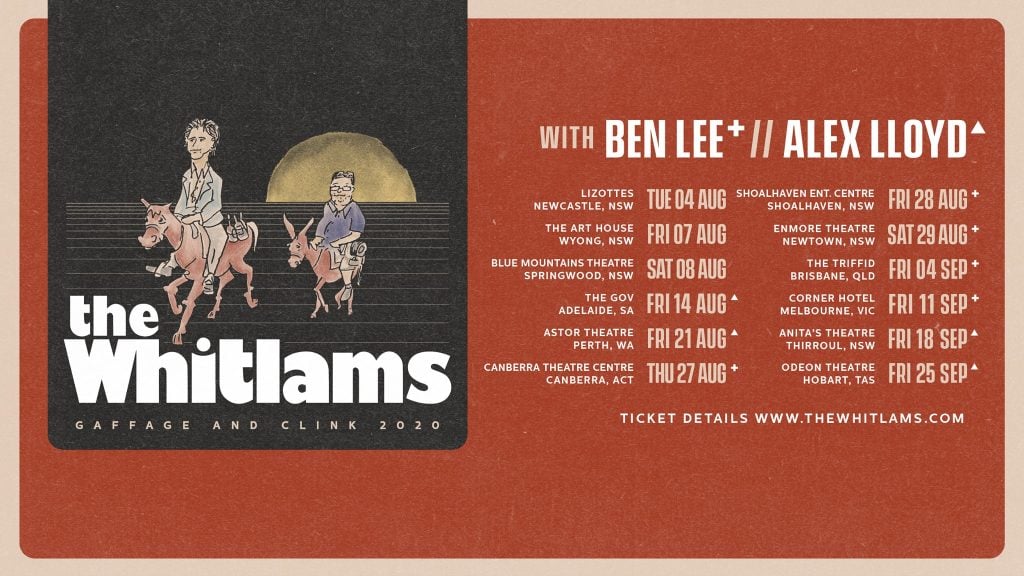 Ahead of the release of their first new music in 14 years, The Whitlams have today announced the ‘Gaffage and Clink 2020’ national tour which will see the much loved band visit all capital cities and several regional centres during August and September.

Sign up at  the Tour page for exclusive pre-sale access to tickets from 10am AEDT on Monday February 17.

“Gaffage and Clink” is backstage lingo referenced in a new, yet to be released song that celebrates the relationship between the band and their long-time tour manager Greg Weaver, who passed away suddenly last year.

The “Gaffage & Clink 2020” tour will feature solo sets from special guests Ben Lee in Sydney, Melbourne and Brisbane, Alex Lloyd in Perth, Adelaide and Hobart, and songbird Emily Wurramara in many of the regional and city dates. In a special one-off for Adelaide, Grinspoon’s Phil Jamieson will join the bill at the Governor Hindmarsh Hotel.

Over the course of The Whitlams’ storied history, they have released five platinum or gold-selling albums in a row (including the beloved “Eternal Nightcap” LP, which was voted in at #17 on triple j listeners’ Favourite Australian Albums of All Time poll in 2011). Since the release of the band’s last studio album, the gold-certified “Little Cloud” in 2006, The Whitlams have collaborated with various state symphony orchestras (including ten sold-out shows at the Sydney Opera House Concert Hall with the Sydney Symphony), performed numerous annual sold out laps of the country and released a ‘best of’ compilation.

It’s been…leisurely.  But Tim Freedman has recently re-discovered his muse and the band is set to release new music in the coming months.  More news on that soon.