Love (in) This City 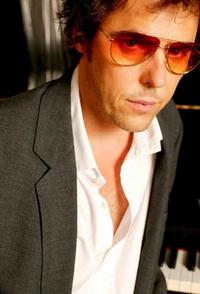 At almost 40, Tim Freedman, Bernard Zuel discovers, has decided to make some changes.

Tim Freedman has this tic when he begins to feel uncomfortable during an interview. And it begins with silence. Normally the singer/songwriter from the most successful independent band in the country, the Whitlams, is not just loquacious but, in keeping with the band name, a man who enjoys playing with words, a man who loves crafting a sentence sounding like an Algonquin-style epigram, then letting it sit there to be enjoyed.

When the dangerous conversational shoals are reached, during the long silences preceding answers, he runs his hand back through his hair time and time again, rougher each time. As if trying to rub the idea out of his mind. As if punishing himself for allowing the conversation to drift into areas where he’s uncomfortable.

But Freedman doesn’t run away from the questions. Never has. Instead, he’ll mutter, “Why on earth did I get into this?” to himself, and follow it with a laugh of exasperation.

The tricky topic today, as he sinks his fork into his ruby snapper, a glass of white at hand (“I haven’t had a drink for a week, but I like to drink when I’m being interviewed. To make it bearable,” he half jokes), begins innocently enough with his confession that he’d love to write a memoir, eventually. A companion piece to the voluminous band videography he’s released on DVD.

“I’d like it to be pretty frank,” Freedman says of the memoir. “I always find it intriguing that a lot of autobiographies I’ve read, like Barry Humphries’s second-last one, they deal in one paragraph [with the news that] suddenly they’ve broken up with their first wife. I’d like to investigate what it is about men that makes them so difficult for women.”

Surely, the obvious question upon hearing this comment from a man who has never married, lives alone and is turning 40 soon is: do you put yourself in that category? And it’s here that we hit the first long pause and the pushing back of the hair.

“Ah [pause], no [long pause]. Because although I’ve been a little hard to pin down, I don’t think I’ve given anyone the expectation that it’s going to be different,” he says.

Does he say to them, “I’ve lived on my own for years, I’m this and not that and you should know this before you get involved with me”?

“This is all going to be real news to my girlfriend,” he mutters again, his accompanying laugh more than a little tinged with self-recrimination at his openness. “It’s been like that in the past [another pause and some intense ruffling of hair] but I think it’s time I worked out how to stop that being my default setting. Because I should admit the possibility of a family at some stage in the future and the first step, I imagine, is the possibility of living with a woman.”

Freedman, at 39, has lived in the same Newtown house for more than 15 years, played in the same band for 12 years, followed the same football team since early childhood and voted the same way at every election. Change isn’t necessarily common.

So is this some age consciousness?

“I’ve always led a completely unstructured life. I got into music because I couldn’t imagine having a nine-to-five gig and I’ve still never had one. Similarly, I’ve had problems with structure on a romantic level. Here I am, I can choose where the band goes next year and what sort of music we make, I’m almost over-indulged with freedom and I’m trying to be careful to not let that make me unsuited to the apparent rigours of togetherness.”

Freedman has compiled the four-hour DVD, most potently images of the other two founding members of the Whitlams, his close friends Stevie Plunder (born Anthony Hayes) and Andy Lewis, who both died of presumed suicides in the ’90s.

“I wanted to do justice to the guys that helped form the band, my aesthetic, my ethos; two lovely fellows who took their lives,” he says.

After a dozen years of touring, recording and memories, Freedman took “long service leave” for three months this year in the middle of a year without a Whitlams tour.

“I went to New York, rented a loft and basically kicked myself into a lower orbit,” he says. “I was living too fast and I pretty much put myself into a gentle form of rehab. I only walked into two drinking bars in three months. It’s very hard getting laid in a foreign city if you’re not drinking, so I had a complete rest.”

Freedman likes that kind of line: droll, possibly self-revealing, but probably not. At all times it’s a line aware of its place in the world and enjoying it. Like his favourite writing (Saul Bellow, John Updike, Phillip Roth, Bob Ellis). Like his next thought.

“I started writing again [in this year off]. One idea I had was to chart a comfortable descent into middle age. The first lines were, ‘Young girls have started saying no/ which is pretty good/ it should have started years ago’. But I’ve dropped that idea.”

Tim Freedman plays at the Basement this Thursday and Friday.