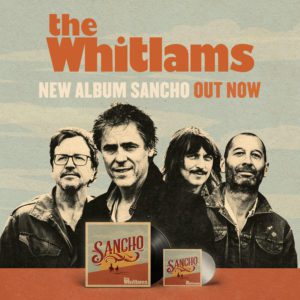 The Whitlams release 7th album “Sancho”, their first since 2006.

Sancho track by track, lyrics and credits can be found on the Sancho tab of the site.

Grab a Sancho CD or vinyl from the online store.

The band will begin their huge ‘Gaffage and Clink Tour’ in March 2022 with 40 dates confirmed across the country. They’ll play their usual rambunctious set highlighting the new album and featuring a broad selection of tunes from their six Platinum and Gold albums. The tour will also feature solo sets from special guests Alex Lloyd and Emily Wurramara on selected dates.