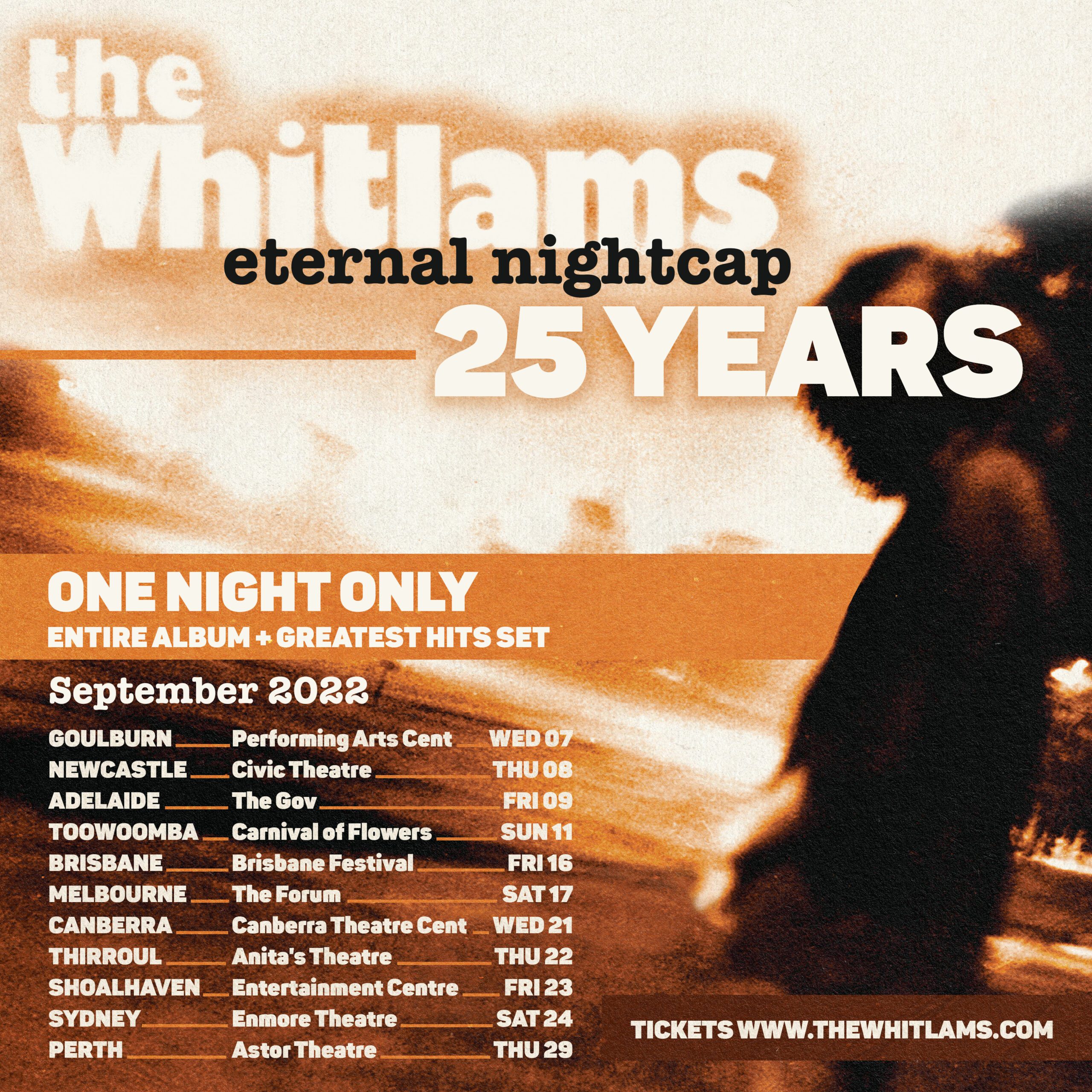 “While tragedy may have shaped the trajectory of The Whitlams, it goes without saying that the group were able to turn it into their strength, with Eternal Nightcap serving as a document of resilience, optimism, and stoicism.” Tyler Jenke – Rolling Stone, 2021

The Whitlams classic Eternal Nightcap turns 25 this September, and the band will mark the anniversary by playing the album in its entirety in a series of one-off concerts around the country.

The album single-handedly brought the piano back onto the youth airwaves in 1997 and propelled them to Best Group at the 1998 ARIA Awards, where they dropped to their knees before Gough Whitlam who had just announced, “It’s my family”.

Eternal Nightcap captured the hearts of a generation by describing a whole decade of its life – the mad, emotional, love-hungry contagion of the late teens and 20s. From love (‘Melbourne’) to heart wreck (‘Life’s a Beach’), mad parties (‘You Sound Like Louis Burdett’) to tragic friendships (‘The Charlie’ trilogy), the album kicked off with the offbeat #1 ‘No Aphrodisiac’ and never looked back.

In ABC Radio’s “My Favourite Album” poll of 2006, Eternal Nightcap was the fourth highest Australian entry at #27, and the album’s reputation as a cultural touchstone has only firmed with time, with Rolling Stone last year placing it #24 in their 200 Best Australian Albums of All Time list.

The Whitlams will follow the album in track order with a greatest hits set featuring favourites like ‘Gough’ (1993), ‘I Make Hamburgers’ (1995), ‘Blow Up the Pokies’ (1999), and a selection of songs from 2022s critically acclaimed album, Sancho.

Joining the band on tour are some very special guests. Fellow traveller from the ’90s, Custard, will open the shows in Newcastle, Canberra, Thirroul and Enmore. The Enmore Theatre will also see Perry Keyes and Band play his 2007 Radio National Album of the Year, The Last Ghost Train Home in its entirety from 7pm sharp. The Whitlams’ Forum debut will be graced by Icecream Hands playing their 2003 classic ‘Sweeter Than The Radio’. Cass Hopetoun joins the bill in Shoalhaven, up and comer Siobhan Cotchin in Perth, and Riley Catherall in Goulburn.

Tickets are on sale now and available via https://linktr.ee/thewhitlamsEN25tour