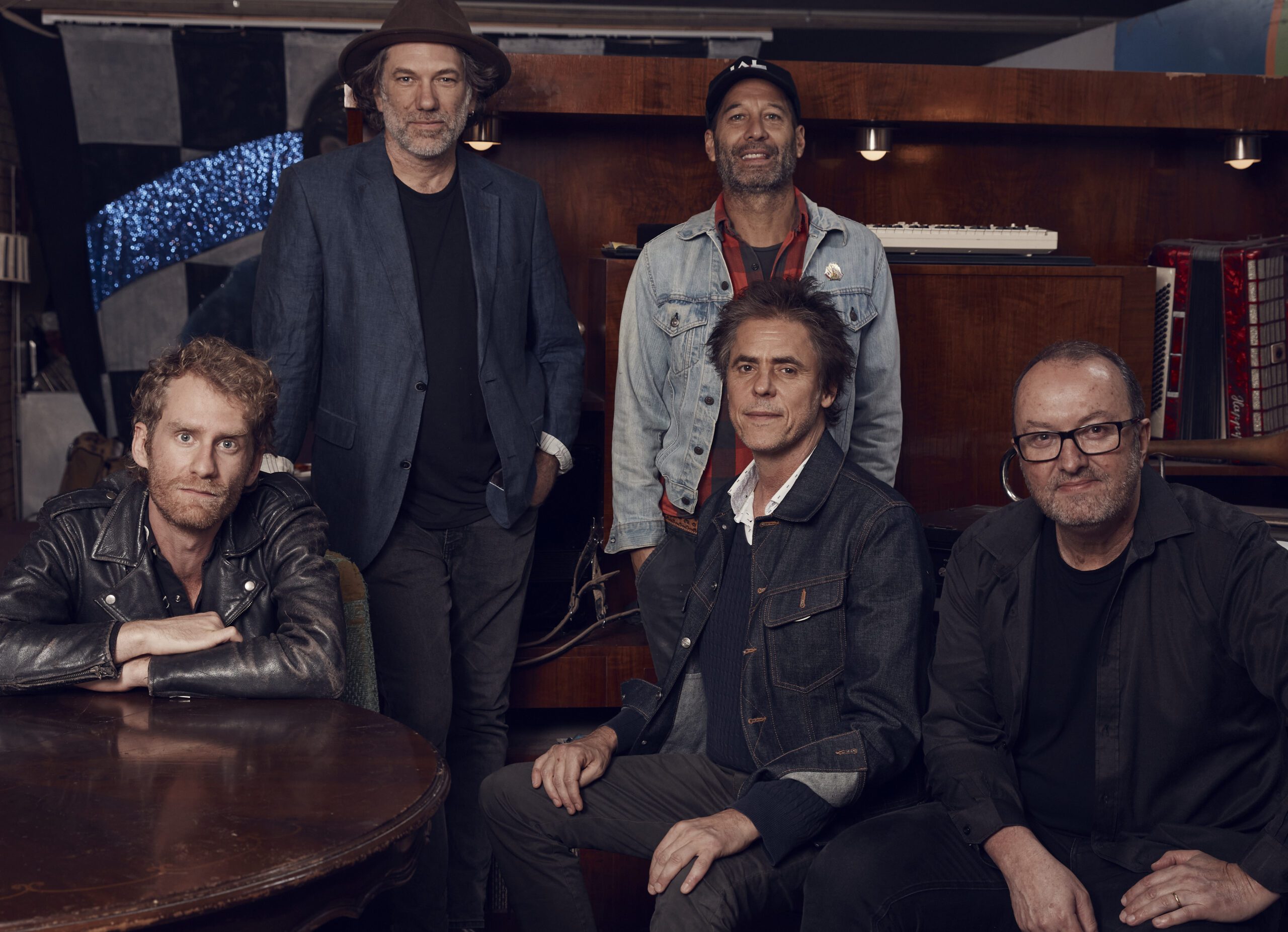 In 2021, during the depths of Covid, Tim Freedman loaded his piano into the back of the car and headed out on a solo regional tour. While driving between Gunnedah and Mudgee, via Black Stump Way, he discovered that The Whitlams’ ‘Man About a Dog’ – a song about driving through the country after heavy rains have broken the drought – had been added to country radio.

“I must admit it was a surprise to be played on Kix Country and Triple A Murri Country, but it was very cool,” says Tim, who vowed: “I have to get out of the city more.”

In Mudgee, Tim hatched an idea. He called award-winning producer Matt Fell, who had worked on his solo album, Australian Idle. “Put together your dream band,” Tim said. “I think I want to make a country album.”

The result is The Whitlams, Black Stump Band, a surprising country detour for one of Australia’s most loved bands, featuring some of Australia’s finest musicians, including Rod McCormack (on banjo, papoose and acoustic guitar), Ollie Thorpe (pedal steel and electric guitar), and Matt Fell on bass.

After reworking The Whitlams’ ‘50 Again’, the next release from the Black Stump Sessions is ‘The Day John Sattler Broke His Jaw’, a song written by Sydney’s Perry Keyes, whose work has been praised by Peter Garrett, Missy Higgins and Tim Freedman.

Tim even wrote a piece about Perry – “an authentic voice from the heart of a disappearing world” – for The Sydney Morning Herald (read here).

The video for ‘The Day John Sattler Broke His Jaw’ was made by acclaimed Sydney photojournalist and director Johnny Barker. “It’s a really special clip, with Johnny incorporating footage from the time,” Tim says.  It also features archival footage of Tim’s father, Barrie Freedman, reading the Channel 7 News in July 1970 tipping Souths for the upcoming Grand Final. Barrie proved correct in his prediction, and Souths went on to win the premiership in September against Manly Warringah, the team that Barrie had been taking his son Tim, then six years old, to watch at Brookvale Oval over the course of the season.

‘The Day John Sattler Broke His Jaw’ celebrates one of the greatest stories in rugby league.  When South Sydney’s captain John Sattler had his jaw broken in the third minute of the 1970 Grand Final, he famously told a teammate, “Hold me up, so they don’t know I’m hurt.” He played out the rest of the game, leading Souths to victory over Manly.  If you are quick, you will see the actual moment John Sattler’s jaw is broken at the Sydney Cricket Ground in the film clip, just as the guitar solo kicks in with Gough Whitlam, Frank Hyde and Brett Whitley.

But even if you’ve never seen a game of rugby league, ‘The Day John Sattler Broke His Jaw’ is an unforgettable epic that is more a social history than a song about sport, evoking the working-class suburbs of inner Sydney as Grand Final day unfolds.

The song references legendary commentator Frank Hyde’s iconic call when a player was kicking for goal:

As Tim Freedman says, “‘The Day John Sattler Broke His Jaw might be the greatest song ever written about rugby league, but it is so much more.”

The Whitlams, Black Stump Band will launch ‘The Day John Sattler Broke His Jaw’ at the Tamworth Country Music Festival on April 22 and embark on a national regional tour in July and August. Freedman and Whitlams’ drummer Terepai Richmond will be joined on the road by the country music luminaries who recorded the song.“‘The Day John Sattler Broke His Jaw’ is the best Australian song you’ve never heard. Until now. The Whitlams’ country version is a revelation.” – Jeff Jenkins, Rhythms Magazine