The Wonder from Narrabundah Some Recollections on Stevie Plunder

The Drum Media
by Tim Freedman

Stevie Plunder and I decided we wanted to work together at the first Big Day Out. Walking towards a side stage I tripped over him around mid-afternoon. He looked as rat-arsed as me so I sat down beside him to finish my beer. We were both between bands, and for the next eight hours we watched the grunge parade, planned a band, and got gloriously, back-slapping drunk. It was January 26, 1992.

Sunset found us reclining uproariously on the asphalt outside the Hordern Pavilion, far too pleased with our new plan of action to be bothered going inside to see what all the fuss was about. Nirvana were playing, and probably wrecking their gear. That day doesn’t seem so long ago, and it is strange to think that since that meeting we set up The Whitlams and recorded two albums; that young Kurt singing inside blew his head off, to Stevie’s disgust; that we toured in a pink Greyhound bus and clocked up four hundred gigs around the country; and that four years to the day Stevie himself took a two and a half hour train trip from Newtown to Wentworth Falls, walked half an hour down a bush track and was found at the bottom of the biggest waterfall in New South Wales.

Stevie was born in Canberra in 1963. A larrikin from birth, he started smoking at eight, drinking at 13, left school at 15, grew his blonde hair to his waist and formed a band. He followed a girl to New Zealand, returned, set up a few more bands culminating in The Plunderers, and moved with them to Melbourne in around 1985. There they drank cask wine, wrote songs on a four-track, got miserable and moved to Sydney. That’s where I met him, supporting Penguins on Safari at the Harold Park Hotel in 1986. He had a squalling, sprawling guitar sound wrung out of a couple of big antique guitar pedals. For me The Plunderers were a rich man’s Ratcat. I loved one song in particular, End of Your World, and would sometimes jump on stage, shoulder Nic Dalton aside and sing the high harmonies. Later, The Whitlams recorded it.

We both moved into Newtown around 1987 so I bumped into Stevie a lot before we actually teamed up; a line in the dunny at the Trade Union Club followed by a Stuyvesant red; a game of poker at his brother Bernie’s house with Stevie constantly niggling for side bets (he always needed more); a beer on the footpath outside the Sando in the days when Warren Spooner booked the bands over the bar.

He was a crooked-toothed, jocular drunk, distinguished by cut-off sleeves, crowned with a beanie and built like whippet. If he didn’t know your name you were addressed as “buddy”. I thought it was the speed that made him so friendly, but he was like that in the morning so I had to suppose he was just friendly.

But it is his music that will be missed by most. When he bothered to write he wrote songs very quickly – he couldn’t handle rigmarole at any stage of the process. He was a human jukebox, the type that could entertain a party for hours with an acoustic guitar, and you can hear the classics in the songs he wrote. Both his ballads and his rockers are full of what seem like effortless hooks, never overblown or overstated.

My favourites are the long narrative songs like Ballad of Lester Walker, Pass The Flagon and Shining, which unfold like short stories. Shining he told me cheerily, was about a boy left behind after his girlfriend committed suicide. He doesn’t believe in the afterlife so he finally decides to hang around this world where at least he can see her in his dreams.

Perhaps it’s audacious to sum up someone’s life and death in a few sentences. But for me the cause, as opposed to the occasion, of Stevie’s death was drink and drugs. He thought his job was to have the best time in the pub because he was onstage. But at the same time he hated any kind of pretence (God spare me his ire if I even attempted the same joke two nights in a row). So to get to be the happiest and to get over the hangover from the night before, he often had to drink a shitload and take whatever was on offer. It was that old merry-go-round that gets faster and faster, and harder and harder to get off; the rock and roll and bright lights becoming a blur.

He stayed on that ride for a long time, and really, few people had as much fun getting messy as Stevie – he did it so well. There were times I wanted to kill him, but they were the times he was already killing himself. The bus we toured in through 1994 would sometimes host drinks after the show. He could clear the whole bus in minutes flat when he saw fit, with language that would make NSW cops blush. Who else could be thrown out of a venue in the middle of his lead vocal? (Catalinas, Byron Bay, 1994). Or, after opening the night, dive tackle the main act and fall asleep on stage while they finished their set? (DAAS Canberra, 1995). Or, after a night on the booze, win a bet to drink a bottle of red wine in 30 seconds? Not Nicholas Cage.

A don’t want to sound like one of the pantheon of dinosaurs that mouth off against drugs after they’ve had a great time on them for 10 years. Me, I just wish I took less in the 80’s, so I could handle a few more now. But however seductive and easy they seem in the short term, there are pitfalls hidden in the future, where the rock and roll nihilist always forgets to look. His resilience can be whittled away until one day after a big kick in the guts, he hasn’t the reserves to bounce back.

Stevie had used plenty of his reserves. He talked of being granted a second life after 30 and his sardonic smile said he’s been to hell and back. He once stayed awake 13 days on speed, he told me, and the cigarette burn scars on his arms were reminders from a low point not to use that shit again. Paul McCartney’s bit in A Day In The Life became “Woke up, got out of bed, drank some wine and went to bed”. You can’t sing that Stevie, they’ll think you’re joking.

I’m told he was a classic Leo – stubborn and proud – though I thought of him more as a pit-bull terrier. And he did give up drugs in his typical way – he just stopped, no program. When he gave up drinking, for six months in 1995, he did it the same way – no tapering off, he just stopped. It was the same with cigarettes. Three weeks before his death he just stopped them as well. The fact he was taking charge of his life so forcefully made his death such a brutal shock.

Indeed, this last year he’d been performing magnificently. A week before he died we toured with Hunters and Collectors. I had a couple of drinks one show and he bemoaned the fact that we seemed to be swapping roles; that he’d have to look after me in my encroaching dark years. As the clouds cleared from his head the old Stevie started to blossom.

He was generous to a fault. Around November he got the fattest APRA cheque we’d seen, for Following My Own Tracks. Excellent, I thought, we can pay off some more of the studio bill for the last album, maybe buy a semi-acoustic guitar. But before I could get to him he’d given half of it away to a friend in trouble, a quarter to another friend who needed it to finish off a recording, and the rest to me for an old poker debt. (How could I say no?) As our manager said when I broke the news to him – “Oh well, you have to admire him”.

Bernie said he was running around doing good deeds for people as if he knew what was going to happen (which I don’t think he did). When the coffee table book about great picture-framers of Australia comes out, Stevie will be on the cover. He’d done things like write out all his songs from the albums, with chord changes for a girl he hardly knew from the pub. He’d talk to anyone down on their luck, and the Sandringham – as the crowd spilled out onto King Street the night of the Memorial Service – was full of these stories. A thousand people had packed St Stephens earlier and the book left for comments was full, too. The last 20 people waited patiently for 10 minutes to write in it while a girl I didn’t know wrote a full page thanking him for holding her hand through some dark episode of her life.

I miss him terribly. Walking into some country pub, if my approaches fail, where is Stevie’s quick-witted, affable style which usually elicited the level of hospitality we hoped for? And where is that extra conscience, picking at me to do the right, most heartfelt thing in a variety of situations?

And of course, I’ll miss him next to me onstage firing off verbal ripostes and pulling off perfect high harmonies. I’m going to continue The Whitlams name, but it will be a very different band. It would be misguided to try and produce the same chemistry as the old line up, though occasionally it will be good to do one or two of Stevie’s songs.

I recently bought the recording Stevie helped out with his APRA money. It’s called Bed of Tits by Whopping Big Naughty. Available on cassette from Troy Horse, it’s the project of Stevie’s youngest brother Stanley Claret, previously known as Justin Credible and before that Justin Hayes, when Stevie’s name was Anthony Hayes. When you’ve worked that through you should know that it’s a high spirited, low-fi masterpiece, dedicated to Stevie Plunder the wonder from Narrabundah, the suburb their parents still live in. I put it on in the car, and listening to “We are the Whoppers and we’re gonna pull your pants down” and the apocalyptic version of the jingle Hard Yakka, I laughed halfway down the Princes Highway to Thirroul, because if you knew Stevie you know what a fitting tribute this cassette is.

This last year Stevie was always keen to get home straight after the gig to be with his wife. With Tori he was the happiest I’d seen him, and when I said about his excesses that “he just stopped” I didn’t tell the whole truth; he relied hugely, maybe solely, on her support. He knew how important their relationship was because when he thought it was breaking apart, he looked around and couldn’t see anything else to hold him up.

In Following My Own Tracks, the darkest of happy pop songs, he sang: “It’s getting harder to decide/On which way I should go./Should I let myself down fast/I don’t think I want to know”.

It was Thursday January 25, 1996. Stevie was upset and went walking. The Sando was shut because all the staff were at the Big Day Out so he walked up to Wedgetail and had a chat with his brother who was in the middle of his shift. Then he crossed the road and had a beer at the Town Hall. Soon after, around five o’clock, he walked back out into the sun, and walked the 100 metres to Newtown Station to get on a train. As with everything else, he was about to just stop. 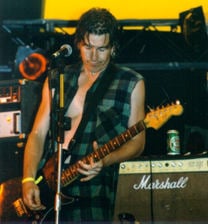