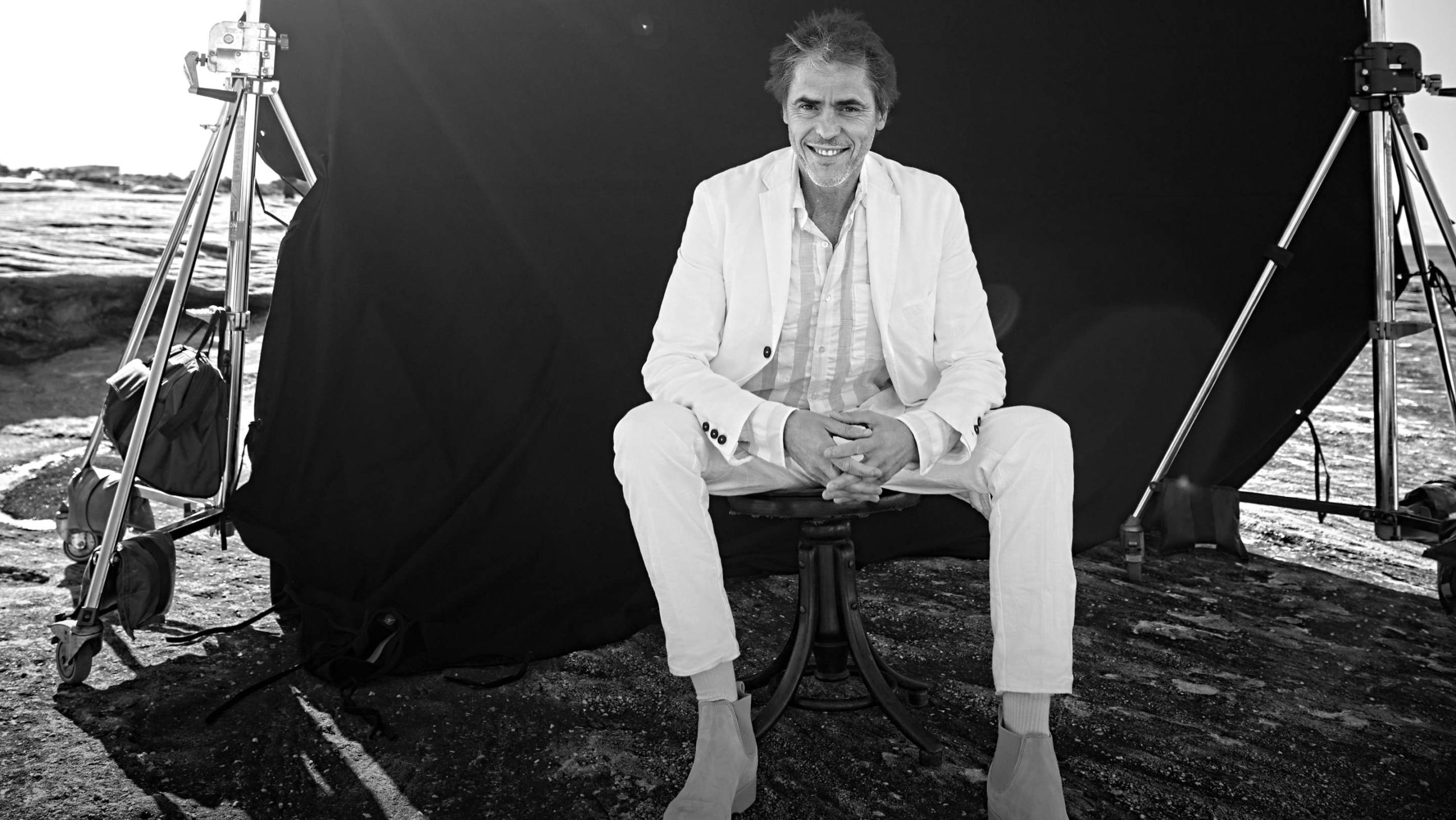 COVID-19 has ruined my plans to have a beer with Tim Freedman at his favourite Newtown pub. Fearing Queensland may shut its border, he has flown north early ahead of a gig. “I’m holed up in a hotel room in Cairns for five days waiting for one show, walking around the boardwalk like Dirk Bogarde in Death in Venice,” he says.

Such is life in 2021. But Tim, the frontman of Australian indie rockers the Whitlams, has managed to make the pandemic work for him. During the first lockdown he bolted to Broken Head, near Byron Bay, where he has a wedding venue that doubles as a holiday home, and cancelled the band’s upcoming tour. He enjoyed the delights of the Byron Shire – “one of the most stunning spots in the entire world” – including surfing each morning with his daughter Alice as the country seemed to stand still.

“I said to Alice, ‘Remember this week – this is like it was in 1974.’ It was just beautiful out there with the fish and dolphins and eight other people.”

In a sense, COVID could not have struck at a worse time for 56-year-old Tim, who was just getting his mojo back after what he calls a “slack” decade. He hadn’t written new music since his 2011 solo album, Australian Idle, and the Whitlams hadn’t put out a record since 2006. He’d rock around the country with the band for a couple of months each year, playing hits like No Aphrodisiac and Blow Up the Pokies, or solo shows that paid tribute to Harry Nilsson and Randy Newman.

“I stepped out of the room,” he says of his creative malaise. “There was a time when there was an avalanche of viewpoints from everyone. It’s called Facebook. I decided that I didn’t really want to think about rhyming couplets for a while. Because when you write songs, you have to live them. You have to be obsessed by them. They cause a lot of clutter in your mind. So I stepped out of the room.

“When you write songs, you have to live them. You have to be obsessed by them. They cause a lot of clutter in your mind. So I stepped out of the room.”

“I didn’t mean for it to be that long. But circumstances arose where I felt comfortable not trying. I lost all my ambition. I was a single father, so that keeps you on the porch a lot more.”

As the decade ended, so did the slackness. Tim says there was no magic moment that rekindled the flame, just sheer willpower.

“It’s like any muscle; you have to exercise it. It’s like a horse coming off a spell; it’ll never run that well the first two runs but it’ll run pretty good fourth or fifth out at Randwick.”

When the pandemic subsided, Tim hit the road, performing 76 solo shows between November and June.

“I pretended to myself that I was starting out afresh and that I needed to work hard and that I was at the bottom of the mountain, and in a way I was. We were working to pay the mortgage. I was riding into towns like Hobart and Launceston and Tamworth that hadn’t had a performer for seven months. Dusting off the pianos, tuning them up. I felt like a frontiersman.”

Tim spent so much time on small stages in tiny towns that he had to slightly delay the release of the Whitlams’ new album, now due in January. But the upcoming Gaffage and Clink tour will showcase a number of its songs – which, in true Whitlams form, bring dark humour to offbeat and ostensibly sad stories.

There’s The Ballad of Bertie Kidd, the retelling of a botched 1980s art heist in Gosford. Kidd and his accomplices came undone after pulling down their balaclavas a few blocks too early, piquing the interest of nearby police officers. Tim heard the tale from his friend Charles Waterstreet, the former barrister, who has a writing credit on the track. “A lot of the details are wrong because it’s Charles,” says Tim. “But I made sure I sent it to Bertie Kidd for permission.” (Kidd, a notorious career criminal, was only released from jail in 2015, at which point then immigration minister Peter Dutton tried to deport him to the UK, his country of birth. But Kidd challenged Dutton and won; he
now lives in Tasmania and is in his late 80s.)

Gaffage and Clink is a tribute to audio mixer and tour manager Greg Weaver, who joined the band just before the release of their ARIA-winning album Eternal Nightcap in 1997 and died suddenly two years ago of a heart attack. “I knew I had to write about him and the only way to do it was to use his nickname,” says Tim. “I always called him Sancho because I felt like the whimsical idiot Don Quixote to his tour-managing steadfastness.”

Tim is famously no stranger to tragedy. The Whitlams’ two other founding members both died young: guitarist Stevie Plunder was found at the bottom of Wentworth Falls in 1996, an apparent suicide, while bassist Andy Lewis killed himself in 2000. In the months following, Tim “sat on this piano in some foreign city” and wrote the devastating The Curse Stops Here, about being the last to survive.

“Until Greg died it felt like I’d had a good run for a couple of decades,” he says. “I’ve written my share of songs about missing men. I thought, here we go again. I was intent on making it a happy, poignant song rather than
a howling-at-the-moon number.”

At his most recent shows, Tim has had the crowd cheer for the category of songs they want to hear: “criminals past and present”, “love and romance”, “dumping and being dumped”, “covers from 1967 to 1972″ or “sad songs about blokes, my longest category by far”.

When we speak, Tim is reading the late, great English writer A.A. Gill’s memoir Pour Me. Its portrayal of Gill’s drink-sodden 20s is knitted from loose memories of 20 or 30 friends who would lurch from Friday nights in Camden pubs to raucous Saturday house parties. Then it chronicles their early deaths.

“He called them the failed and the furious,” says Tim. “It’s a good name for a daytime soap. I’m lucky. I knew plenty of failed and furious, and we’re all lucky if we manage to get out the other side.”

Another track on the album, (You’re Making Me Feel Like I’m) 50 Again, is a joyous, tongue-in-cheek ode to ageing, with a video clip that ditches the Robert Palmer-esque trope of young bikini models for a throng of more mature women in sensible swimwear and pink caps powering through the Byron Bay surf. “It’s about mortality but it’s also just funny to think that everyone under 40 won’t get the joke,” he says.

At 56, Freedman feels better than he did at 50. He has softened a lot of his rock’n’roll excesses; there’s less drinking and more surfing. “I’m healthier now. If you learn how to look after yourself, then you feel 30 your whole life. I get the creaks. I’ve got terrible knees. All that means is I have to go to the gym and ride a nine-foot board, not a six-foot board.“

“The thing about children is they judge their parents a lot harsher than a lot of parents get judged anywhere else. So if you want to take it seriously, you have to improve your game.”

He largely credits his healthier life to raising Alice, now 16. “I was a single father for a lot of years. It was challenging but I quietened myself down and I think I did a good job. The thing about children is they judge their parents a lot more harshly than a lot of parents get judged anywhere else. So if you want to take it seriously, you have to improve your game in a whole lot of facets.

“You’ve just got to be steady and present. I was a wanderer until then, and I was used to doing what the hell I wanted to, whenever I wanted to. I almost suffered from a surfeit of freedom. I’d get up in the morning and go, ‘Right, I’m going to take the band to England’ or ‘I’m going to do a solo tour to Ireland’ or ‘I’m going to go to Paris for four weeks and sit in a bath and read Sartre’. And I did all those things until I was 45, and maybe if Alice leaves home in two years’ time I’ll start doing them again.”

Home is mostly Sydney’s inner west, a mainstay of Tim’s life and the background to any number of Whitlams songs (so much so that The Chaser once satirised his preoccupation with Newtown in a musical skit). But he has a love-hate relationship with the city, burnt by years of lockout laws, suffocating rules and “overzealous security guards in every pub”.

“I look back so fondly on the mid-’90s,” Tim says. “The band would do three sets at the Sandringham. In between sets we’d all spill out on the footpath and drink beer. I tell young people that now and they feel like I’m talking about the Weimar Republic. They can’t imagine such liberties. I’m hopeful that nature abhors a vacuum and the vacuum of civilisation in Sydney will lead to some more punter-friendly spaces for us to mingle.”

He has a theory about when the city lost its way – one that will not surprise anyone who remembers his song You Gotta Love This City. “The Olympics stuffed Sydney because we got used to six layers of bureaucracy ruling everything,” Tim says. “And a whole class of technocrats justified their existence by putting rules in place for a more efficient culture and community. It’s my theory; prove it isn’t so.”

The poet of Sydney confesses he had long intended to move to Melbourne, but needed to live near his band, his house and, later, his daughter’s school.

“So it never happened. Maybe one day,” Tim says. “I think it’s the most mature and cultured city in Australia. And when I become more mature and more cultured, maybe it’ll suit me.”

Michael Koziol is deputy editor of The Sun-Herald, based in Sydney.

This article appeared in Sunday Life magazine within the Sun-Herald and the Sunday Age July 4, 2021.