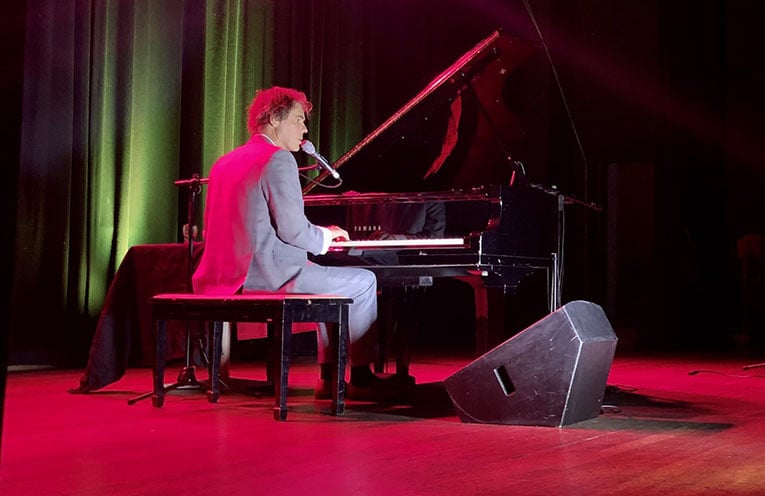 MUSIC returned to the Sawtell RSL last Saturday night with an engaging performance by Tim Freedman, mainstay of The Whitlams.

Sawtell’s own Kada Miller opened the show with a slow rendition of Men at Work’s “Down Under”.

She played and sang some original songs and her musicianship and powerful vocals drew an enthusiastic reception from the crowd.

The RSL had produced a grand piano for Freedman to play and he attacked it enthusiastically.

His songs tell incisive and often humorous stories about life and relationships, and his vocal style allowed every word to be clearly understood by listeners.

His ‘patter’ between songs elicited plenty of laughs.

As well as classics such as “No Aphrodisiac” and “I Make Hamburgers’” he performed The Whitlams’ first new song in 14 years, “Ballad of Bertie Kidd” about a Rabbitoh’s supporter who told Freedman he was involved in a bungled heist at a Gosford art gallery.

Freedman introduced the song by explaining that the gang of four were intending to steal paintings by Pro Hart, Norman Lindsay and Ken Done, but they put on their balaclavas too early.

Four men in balaclavas in a car on the quiet streets of Gosford were quickly noticed and apprehended.

After singing the song, Freedman said that he tracked down Bertie Kidd, the ringleader, in Hobart, and the 87-year-old appeared briefly in the song’s video.

Freedman appeared to regard the Coffs Coast fondly.

He told the audience that The Whitlams last performed on the same stage at ‘The Love Boat’ fourteen years ago.

Freedman also said, “I wrote “Melbourne” during a sound check at the Hoey Moey in 1993.”

The audience sang along to many of the songs and their obvious enjoyment of the entire perfomance indicated that live music from iconic acts has been sorely missed.

News of the Area – Modern Media